The Grant Wood Studio is owned and operated by the Cedar Rapids Museum of Art and is a member of Historic Artists’ Homes and Studios, a program of the National Trust for Historic Preservation.

Admission is free during regular Studio hours thanks to a grant from the Esther and Robert Armstrong Charitable Trust. The Studio is located at 810 Second Avenue SE near downtown Cedar Rapids. A free parking lot is available for Studio visitors. Please note that while the Armstrong visitor Center (ground floor) is handicapped accessible, the Studio on the second floor is not.

Grant Wood Studio Hours: Open from noon until 4:00 pm on Saturdays and Sundays with free docent-guided tours from April-December. Tours begin on the hour and half hour during these times. If you need a time other than these weekend hours, please contact Education Director Erin Thomas at ethomas@crma.org, fees apply during these other times.

Grant Wood was born on a farm near Anamosa, Iowa, and after his father's death in 1901, the Wood family moved to Cedar Rapids. Wood spent most of his life in Cedar Rapids, and it was here he first developed his artistic aspirations. As a youth growing up in this small but burgeoning Midwestern city, his teachers and the community applauded Wood’s talent for drawing and making clever objects.

Wood attended Washington High School and, together with his good friend and fellow artist, Marvin Cone (1891-1965), painted scenery for school plays and illustrated school publications. The two young artists also assisted with the installation of exhibitions at the Cedar Rapids Art Association, founded in 1905 and located in the Carnegie Library. At times, they even provided security by sleeping in the galleries.

While in high school, Wood taught himself to make jewelry, copperware, ornamental light fixtures, and furniture. Following his 1910 high school graduation, Wood completed two summers of study at the School of Design, Handicraft, and Normal Art (now the Minneapolis School of Art and Design). In 1913 he moved to Chicago to study at the School of the Art Institute, but by 1916, due to financial difficulties, Wood returned to Cedar Rapids.

Between 1920 and 1928, Grant Wood made four trips to Europe. His first was to Paris in the summer of 1920 with his painter-friend Marvin Cone. The second trip, from 1923 to 1924, allowed him to study at the Académie Julian in Paris, during which time he also traveled to Sorrento, Italy. At the end his stay in Paris, a gallery agreed to hold an exhibition of Wood’s work. In the summer of 1926, Wood returned to Paris for his exhibition but the show did not launch his career as he had hoped it would. Wood’s final trip to Europe was in 1928, when he traveled to Munich to help fabricate a large stained glass window at the Emil Frei Art Glass studio.

Wood’s 1928 trip to Munich gave him time to explore the city’s great museums, where he closely studied the paintings of Hans Memling and other northern European artists of the late 15th and 16th centuries. These Northern Renaissance artists inspired Wood to abandon his impressionistic style and to develop a much more complex approach to the way he represented people. Whether they were portrayals of real people (such as his mother in Woman with Plants, or the father of a friend and patron in Portrait of John B. Turner, Pioneer, or fictionalized Midwestern characters as in American Gothic), Wood’s new portraits carefully staged not only the sitters, but their clothing, props, local architecture, plants, and even the Iowa landscape that appears in the background.

In late 1930, American Gothic won third prize in the Art Institute of Chicago’s 43rd Annual Exhibition of American Painting and Sculpture. The popularity of the painting, coupled with the frequent complaint that it unfairly stereotyped Midwesterners made Wood a national figure.

In 1934, Wood was appointed Director of the Public Works of Art Projects in Iowa. A year later, he began teaching at the University if Iowa, an affiliation which continued until his death in 1942. During these same years, Wood also taught and lectured throughout the United States, becoming a spokesman for the concept of Regionalism in art. He, along with Thomas Hart Benton and John Steuart Curry, shaped America's vision of the Midwestern landscape and the people that inhabit it.

The Cedar Rapids Museum of Art is proud to possess the world's largest selection of works by Grant Wood, with a selection of these works on display at all times. During a visit to the CRMA you can view many of his works, and of course, a visit to the Grant Wood Studio allows you to step inside one of his greatest creations.

Grant Wood's home and studio is located at 5 Turner Alley. Grant Wood (1891-1942) was a prominent member of the Regionalist movement. He lived and worked in this studio from 1924 to 1935.  HIs most famous painting, "American Gothic," was painted in this studio in 1930.

The Grant Wood Studio is owned and operated by the Cedar Rapids Museum of Art and is a member of Historic Artists' Homes and Studios, a program of the National Trust for Historic Preservation. 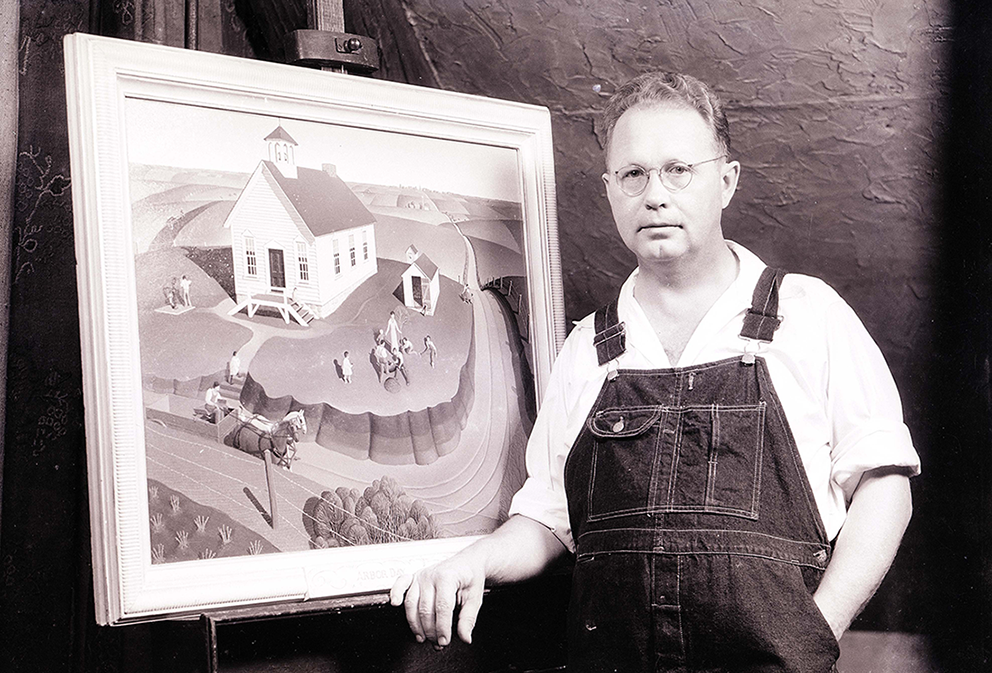